In a Host of Ailments, Seeing a Brain Out of Rhythm

I have a neurological problem that I've never told anyone about — not a soul," he recalls saying to his colleague Dr. Rodolfo Llinás before an auditorium packed with neurosurgeons. "You listen to my brain and tell me what it is. If you do, I will believe you."

So it was that Dr. Kelly allowed his brain to be scanned in a MEG machine, a device that measures tiny magnetic signals reflecting changes in brain rhythms.

After analyzing his colleague's brain activity, Dr. Llinás announced: "You have tinnitus. Right brain. The phantom sound ringing in your ears must be very loud. It is low frequency, a rumbling noise." 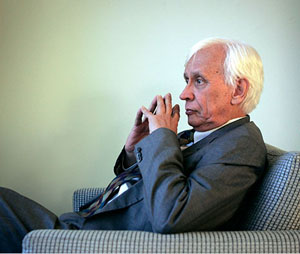 Dr. Kelly was stunned, he said later. He had been hearing that noise ever since he served at a station hospital in Danang during the Vietnam War. The roar of helicopters dropping off casualties had permanently warped his hearing.

Dr. Llinás, the chairman of neuroscience and physiology at the N.Y.U. School of Medicine, believes that abnormal brain rhythms help account for a variety of serious disorders, including Parkinson's disease, schizophrenia, tinnitus and depression. His theory may explain why the technique called deep brain stimulation — implanting electrodes into particular regions of the brain — often alleviates the symptoms of movement disorders like Parkinson's.

The theory is far from widely accepted, and most neurosurgeons say the mechanisms behind deep brain stimulation remain a mystery. Still, surgeons like Dr. Kelly are excited about the research, saying it suggests new targets for treating a variety of disorders.

"It's a mystery to me why it took me so long to get what Rodolfo was saying," Dr. Kelly said. "I’d like to latch on to the excuse that I was too busy. In truth, I was too dumb to listen. Now I tell my younger colleagues, ‘Listen to this man.' He’s on to something that can revolutionize neurosurgery and our understanding of how the brain works."

Dr. Llinás (pronounced yee-NAHS), born in Colombia 73 years ago, has long followed his own instincts.

Unlike neuroscientists who study the brain’s outer layer, or cortex, he has focused his attention on the thalamus, a paired structure in the midbrain. He has found that each walnut-size thalamus has 30 or more nuclei, each of which specializes in one type of information collected from the senses — sights, sounds, movements, external touches, internal feelings and so on.

Each nucleus sends its message to a specific area of the cortex for initial processing. But then the information is shuttled back down to the thalamus, where it is associated with other senses. And then it is returned to the cortex in a richer, multisensory form that is constantly elaborated, reverberating into a symphony of life experiences.

The thalamus and cortex work dynamically by passing loops of information back and forth, Dr. Llinás said. "If you think of the brain as an orchestra, the thalamus is the conductor. The players are in the cortex. When the conductor makes a move, the players follow. The conductor then hears their sounds and makes new moves, resulting in a continuous dialogue."

Cells in the thalamus and cortex rely on intrinsic electrical properties to keep the music going. "Groups of neurons, millions strong, act like little hearts beating all their own," Dr. Llinás said. They can oscillate at multiple frequencies, depending on what is happening in the outside world.

When the brain is awake, neurons in the cortex and thalamus oscillate at the same high frequency, called gamma. "It's like a Riverdance performance," Dr. Llinás continued. "Some cells are tapping in harmony and some are silent, creating myriads of patterns that represent the properties of the external world. Cells with the same rhythm form circuits to bind information in time. Such coherent activity allows you to see and hear, to be alert and able to think."

But at day's end, cells in the thalamus naturally enter a low-frequency oscillation. They burst slowly instead of firing rapidly. With the thalamus thrumming at a slower rhythm, the cortex follows along. You fall asleep. Your brain is still tapping out slow rhythms, but consciousness is suspended.

So if a small part of the thalamus gets permanently stuck at a low frequency, or part of the cortex fails to respond to the wake-up call, Dr. Llinás said, an abnormal rhythm is generated, a so-called thalamocortical dysrhythmia.

"Neurosurgeons think in terms of anatomical changes — holes in the brain, growths, tumors," he said. "But a maintained, abnormal low frequency in a part of the brain can generate what is called an attractor. Think about a tornado. It’s just wind that is turning on itself. In doing so, it becomes a thing that, while made out of air, has a life of its own.

"A thalamocortical dysrhythmia also has a structure. It is a thing. And it leads to the symptoms seen in a wide variety of brain diseases."

Dr. Llinás believes that these disrupted rhythms can be set off by a variety of causes — faulty genes, brain injury, chemical imbalance. In the case of his colleague Dr. Kelly, a small portion of the auditory cortex was damaged by helicopter noise. Dr. Llinás spotted it in the MEG machine — a spot oscillating as if in light sleep.

Tinnitus and other dysrhythmias can be treated with deep brain stimulation, drugs or tiny surgical lesions that return brain oscillations to normal, he said. The goal is to wake up parts of the brain that have fallen into low-frequency sleep mode.

In Parkinson's, chemical changes send bits of the thalamus into a low-frequency mode. If the affected part of the thalamus connects to the brain’s primary motor center, a slow tremor, at four cycles per second, appears. The patients shake at the same frequency as the oscillating motor thalamus.

If the abnormal bit of thalamus connects to a region that plans movements, the patients cannot initiate movement.

And if the piece of thalamus is involved in making smooth movements, the patients experience increased muscle tone. They become rigid.

Dr. Llinás says a patient can experience several of these symptoms or only one, depending on the site of the abnormal rhythm. By the same token, he says, normal function can be restored by acting on the right spot.

Deep brain stimulation, in which slender electrodes are implanted directly into the cortex or thalamus, has been used in 40,000 patients around the world, mostly for movement disorders, and is now being tried for schizophrenia, epilepsy, Tourette's syndrome, dystonia, chronic pain, depression, phantom pain and traumatic brain injury.

Dr. Llinás says that even if the treatments work, they should be regarded not as a cure but as a way to alleviate symptoms. And he acknowledges that many things can go wrong: the electrode needs to be placed in exactly the right spot, and because there are individual differences in brain structures, surgeons may need to make an educated guess. Also, wires break. Tissues become infected.

"Then you have to choose a frequency," he said. "If it's too high, the stimulation can produce hallucinations or other psychiatric problems. One woman could not stop crying."

Fortunately, he said, deep brain stimulation is reversible: pull out the electrodes, and the side effects subside.