Colicky Baby? Read This Before Calling an Exorcist 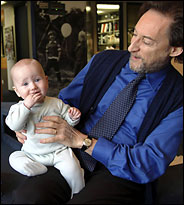 Regard the colicky baby at full throttle. Tiny arms and legs stiffen. Tummy goes hard. Face resembles a beet emitting paroxysmal shrieks. Unbelievably, the cry goes on for one, two, even three hours without pause. What's a parent to do?

Run a checklist. Is the baby hungry? Wet? Feeling gas pains? Allergic to something?

No, nothing is wrong. The baby appears healthy, even thriving. So typically nerve-shattered, exhausted parents call the pediatrician who, after examining the infant, gives a diagnosis: colic. Then, reflecting the deep mystery that still surrounds unsoothable crying, the physician offers medical advice, which these days falls into these three camps:

* Colic is perfectly normal; learn to live with it. It is temporary.

* Colic indicates something is wrong with your baby; keep looking for the cause and treat it, or get help for the family.

* Colic is inevitable; but you can try a new method that will stop crying by turning on a baby's internal "calming instinct."

Like deadlocked juries, medical experts who study colic agree on a central observation: all babies cry for short periods, but one in five has prolonged bouts of frantic screaming. Then they beg to differ. The controversy is being played out in medical journals, at conferences and, for the frazzled parents, in books written for the layman.

Not so long ago, the main explanation for colic was intestinal distress like gas or cramps, said Dr. Ronald G. Barr, a pediatrician and leading authority on colic at the University of British Columbia in Vancouver. That is no longer true, he said. A very few infants have gastric reflux or allergies to cow's milk or formula, but a vast majority are perfectly healthy.

The babies are not in pain, Dr. Barr said. A colicky cry sounds the same as any other cry. About 60 percent of crying is due to fussiness, 30 percent is related to genuine upset and 10 percent is emblematic of true colic, which means that it is unsoothable.

Unsoothable crying is torture for parents, Dr. Barr said. It is completely unpredictable. "A giggly happy baby will launch into a full-blown cry and then stop on a dime," he said.

Studies of infants around the world show that unsoothable colic is a natural phase of early infant development, Dr. Barr said. Babies typically begin crying at 2 weeks of age. Colicky crying peaks at 6 weeks and ends by 3 to 4 months. It is not related to weak parental skills, being a, single parent, postpartum depression or anything done by adults. Infants in primitive tribes who are held 24 hours a day and breast-feed constantly show the same pattern in peak inconsolable crying.

"We now think of colic as being a part of normal development," said Dr. Ian St. James-Roberts, an expert in child development at the University of London Institute of Education. The infants are not stressed. But around 6 weeks of age, their brains undergo major changes that give rise to bouts of colic.

In their book "Early Infant Crying, a Parent's Guide" (Johnson & Johnson Pediatric Institute, 2001), Dr. St. James-Roberts and Dr. Barr advise parents to try to soothe their babies. But if the crying persists, they said, "it is O.K. to walk away."

Dr. Barry Lester, a professor of psychiatry and pediatrics at Brown and a practitioner at the Colic Clinic of Women and Infants Hospital of Rhode Island, said he could not disagree more. "While it is true that babies eventually stop crying," Dr. Lester said, "I strongly object to those who say colic is not a problem."

In his new book, "Why Is My Baby Crying?: The Parent's Survival Guide for Coping With Crying Problems and Colic" (HarperCollins), Dr. Lester defines colic as crying "that interferes with child development or causes problems in the family."

The Colic Clinic sees 100 new families a year, usually with three or four sessions each, Dr. Lester said. "We find a fair number of babies that have reflux," he said. "We see physical signs of pain. Colic does produce a pain cry, and it reflects an immature nervous system." Parents are given advice on how to soothe their babies and to seek help from family counselors.

Amid such disagreements, another pediatrician, Dr. Harvey Karp, who has a private practice in Santa Monica, Calif., claims that he has devised a method for calming screaming babies - in minutes.

In his book and DVD called "The Happiest Baby on the Block" (Bantam Books, 2002), Dr. Karp shows parents five steps that performed together set off what he calls an infant's innate calming instinct. He says the method can also help infants who do not have colic to sleep an extra hour or two a night.

"It's remarkable," said Dr. Eileen Anderson-Fye, a postdoctoral student in anthropology at the University of California, Los Angeles, whose daughter just turned 3 months old. "We do the steps, and instantly she calms down. It looks like something is switching off."

Dr. Karp's method is outstanding, said Dr. Lewis Leavitt, a professor of pediatrics and an expert on parent-infant interaction at the University of Wisconsin. While the elements of Dr. Karp's work are not new, he said, they are put together in an entirely new way.

Dr. Karp has "a very interesting set of ideas but no evidence," said Dr. St. James-Roberts. "He needs to run studies that collect data. Until he does, it's hard to know where the showman stops and the clinical science begins."

Dr. Karp said his technique involved helping the baby cope with what he calls the fourth trimester of life.

Human infants are born in an immature state because the birth canal cannot handle a larger head with a bigger brain. Thus humans are born with an apple-size brain, limited control of muscles and senses, and a small kit of survival tools. They can suck, swallow, sneeze and cry.

For the first two weeks of life, Dr. Karp said, newborns sleep and eat. Then, over the next 10 weeks or so, they enter a state of quiet alertness. Their brains increase in size by 20 percent as circuits mature and make functional connections.

Eighty percent of babies have no problem doing this, he said. They cry for a reason and then calm down.

But a subset of infants cannot stop crying. They cannot gather themselves. For them, the three months after birth is a tremendous challenge.

Dr. Karp's solution: recreate for infants sensations in the womb to help them stay calm.

In the womb, the soon-to-be-born infant is packed tightly, head down in fetal position, with lots of jiggling and a whooshing sound - blood flowing through the placenta - that is louder than a vacuum cleaner. According to Dr. Karp, these conditions put the fetus into a trance.

"Fussy babies would really benefit if they could hop back inside the uterus whenever they get overwhelmed," Dr. Karp said. Paradoxically, their distress can also stem from being understimulated. "Our culture believes in the strange myth that a baby wants to be left in a quiet dark room," he said. "But what is this stillness for a newborn baby? It might be aversive, since the womb is jiggly and noisy."

To calm a baby, Dr. Karp sets out five maneuvers that he says will touch off a calming reflex and put the infant to sleep. They must be carried out progressively, as a kind of dance, to work their magic, he said.

The first is swaddling or snug wrapping that imitates the restrictiveness of the womb for the last two months of pregnancy. Parents have swaddled babies for millenniums, Dr. Karp said, and it is a cornerstone of his method. But it is only the first step and will not by itself stop the crying.

The second step is to hold the swaddled infant in one's arms or on one's lap and roll the baby onto its side or stomach.

Third is a very loud shushing noise delivered directly into the baby's ear. The sound imitates what the fetus hears inside the womb as blood pulses through the placenta. The shushing must be as loud or louder than the infant's cries, Dr. Karp said.

Next comes the jiggling. A fetus is accustomed to certain motions that can be replicated for the crying infant. Dr. Karp recommends supporting the baby's head and neck while delivering tiny energetic movements, like shivering. The movements must be gentle, he said, to avoid shaking the baby's vulnerable head.

The last step is nonnutritive sucking. A baby will calm itself if it can suck on a finger.

Dr. Karp agreed with his critics that the method needed to be tested in carefully planned studies. Plans are under way to send one group of parents home with his DVD and another group with a regular child-care video and watch what happens.

Meanwhile, his book has sold more than 350,000 copies and has been translated into 12 languages.