By Sandra Blakeslee. Published in New York Times on April 2, 2012.

If you wear a white coat that you believe belongs to a doctor, your ability to pay attention increases sharply. But if you wear the same white coat believing it belongs to a painter, you will show no such improvement. 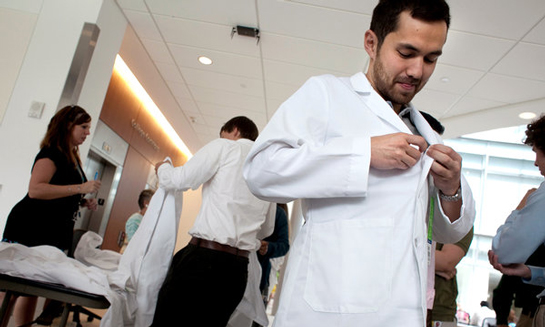 So scientists report after studying a phenomenon they call enclothed cognition: the effects of clothing on cognitive processes.

It is not enough to see a doctor's coat hanging in your doorway, said Adam D. Galinsky, a professor at the Kellogg School of Management at Northwestern University, who led the study. The effect occurs only if you actually wear the coat and know its symbolic meaning – that physicians tend to be careful, rigorous and good at paying attention.

The findings, on the Web site of The Journal of Experimental Social Psychology, are a twist on a growing scientific field called embodied cognition. We think not just with our brains but with our bodies, Dr. Galinsky said, and our thought processes are based on physical experiences that set off associated abstract concepts. Now it appears that those experiences include the clothes we wear.

"I love the idea of trying to figure out why, when we put on certain clothes, we might more readily take on a role and how that might affect our basic abilities," said Joshua I. Davis, an assistant professor of psychology at Barnard College and expert on embodied cognition who was not involved with the study. This study does not fully explain how this comes about, he said, but it does suggest that it will be worth exploring various ideas.

There is a huge body of work on embodied cognition, Dr. Galinsky said. The experience of washing your hands is associated with moral purity and ethical judgments. People rate others personally warmer if they hold a hot drink in their hand, and colder if they hold an iced drink. If you carry a heavy clipboard, you will feel more important.

It has long been known that "clothing affects how other people perceive us as well as how we think about ourselves," Dr. Galinsky said. Other experiments have shown that women who dress in a masculine fashion during a job interview are more likely to be hired, and a teaching assistant who wears formal clothes is perceived as more intelligent than one who dresses more casually.

But the deeper question, the researchers said, is whether the clothing you wear affects your psychological processes. Does your outfit alter how you approach and interact with the world? So Dr. Galinsky and his colleague Hajo Adam conducted three experiments in which the clothes did not vary but their symbolic meaning was manipulated.

In the first, 58 undergraduates were randomly assigned to wear a white lab coat or street clothes. Then they were given a test for selective attention based on their ability to notice incongruities, as when the word "red" appears in the color green. Those who wore the white lab coats made about half as many errors on incongruent trials as those who wore regular clothes.

In the second experiment, 74 students were randomly assigned to one of three options: wearing a doctor's coat, wearing a painter's coat or seeing a doctor's coat. Then they were given a test for sustained attention. They had to look at two very similar pictures side by side on a screen and spot four minor differences, writing them down as quickly as possible.

The third experiment explored this priming effect more thoroughly. Does simply seeing a physical item, like the coat, affect behavior? Students either wore a doctor's coat or a painter's coat, or were told to notice a doctor's lab coat displayed on the desk in front of them for a long period of time. All three groups wrote essays about their thoughts on the coats. Then they were tested for sustained attention.

Again, the group that wore the doctor's coat showed the greatest improvement in attention. You have to wear the coat, see it on your body and feel it on your skin for it to influence your psychological processes, Dr. Galinsky said.

Clothes invade the body and brain, putting the wearer into a different psychological state, he said. He described his own experience from last Halloween (or maybe it should be called National Enclothed Cognition Day).

He had decided to dress as a pimp, with a fedora, long coat and cane. "When I entered the room, I glided in," he said. "I felt a very different presence."

But what happens, he mused, if you wear pimp clothes every day? Or a priest's robes? Or a police officer's uniform? Do you become habituated so that cognitive changes do not occur? Do the effects wear off?

More studies are needed, he said.

This article has been revised to reflect the following correction:

An article on Tuesday about the effects of clothing on cognitive processes misstated the name of the journal that published a recent study showing that wearing a doctor's white coat led subjects to pay sharper attention. It is The Journal of Experimental Social Psychology, not The Journal of Experimental Social Cognition. The article also described the findings of an earlier study incorrectly. In that experiment, people who held a hot drink in their hands rated others personally warmer; it is not the case that people were rated personally warmer if they held a hot drink.

Picture: Michael Temchine for The New York Times.
PERCEPTION Wearing a coat thought to be a doctor’s may improve attention.