Learning to move a computer cursor or robotic arm with nothing but thoughts can be no different from learning how to play tennis or ride a bicycle, according to a new study of how brains and machines interact.

The research, which was carried out in monkeys but is expected to apply to humans, involves a fundamental redesign of brain-machine experiments.

In previous studies, the computer interfaces that translate thoughts into movements are given a new set of instructions each day — akin to waking up each morning with a new arm that you have to figure out how to use all over again. 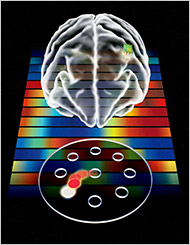 In the new experiments, monkeys learned how to move a computer cursor with their thoughts using just one set of instructions and an unusually small number of brain cells that deliver instructions for performing movements the same way each day.

“This is the first demonstration that the brain can form a motor memory to control a disembodied device in a way that mirrors how it controls its own body,” said Jose M. Carmena, an assistant professor of computer and cognitive science at the University of California, Berkeley, who led the research.

The experiments were described Monday in the journal PloS Biology.

The results are very “dramatic and surprising,” said Eberhard E. Fetz, an expert in brain-machine-interface technology at the University of Washington, who was not involved in the research. “It goes to show the brain is smarter than we thought.”

In this experiment, as in previous ones, electrodes are implanted directly into the brain to record activity from a population of 75 to 100 cells that help guide movement. As animals move a hand or arm, the activity pattern of those cells is recorded.

Later the limb is immobilized, and researchers can predict what the animal wants to do with it by looking at the cells’ activity; that pattern is then sent to a so-called decoder — a computer algorithm that transforms the brain signals into commands that a machine can carry out.

But because of the variability caused by motions of the electrodes and changes in brain cells, researchers have assumed that a new population of cells would be in control of the movements each day. They recalibrated the decoder each day, and the subject had to relearn the task — move a cursor, reach with a robot arm — every time.

Dr. Carmena wondered what would happen if he kept the decoder constant as it measured the activity of just a few neurons observed to fire reliably with a given task. Could an initially random group of 10 to 15 neurons, with practice, be coaxed into forming a stable motor memory? Could the brain, not the decoder, do the learning?

Dr. Carmena’s team trained two monkeys to use a joystick to move a computer cursor to blue targets on a circle and extracted a decoder for the movements. The animals then practiced moving the cursor with their thoughts for 19 days.

In the beginning, the cursor trajectories were hit or miss. But over time the pattern of cell firing stabilized, and the monkeys developed a stable mental model for cursor control.

This is exactly how you learn to ride a bike or play tennis, Dr. Carmena said. At first your movements are uncoordinated. But with time, a motor memory is engraved in your brain.

Dr. Carmena then decided to test the memory in his monkeys. He changed the decoder. Instead of moving the cursor to blue targets, for example, the color changed to yellow.

Within a couple of days, the monkeys learned the new task using the same small group of cells, he said. Moreover, they could switch back and forth between the tasks with ease. They had two mental maps that did not interfere with one another.

This is like learning to play tennis on a clay court and switching to a grass court or like switching between a mountain bike and a road bike, he said. The brain can acquire multiple skills using the same set of neurons to carry out different movements.

If brain machine interfaces can be made safe enough for use in humans — a feat that is by no means guaranteed — paralyzed people may one day operate prosthetic limbs as naturally as they use their own limbs, Dr. Carmena said.

Picture: John Blanchard. In experiments, signals from the brain's motor cortex were translated by a "decoder" into deliberate movements of a computer cursor.