When the Senses Become Confused 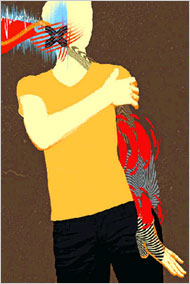 One morning seven years ago, Sherrilyn Roush woke to discover that the left side of her body had gone numb.

The cause was obvious, according to Dr. Roush, now 42 and a philosophy professor at the University of California, Berkeley: the day before, she had been given a prescription decongestant with an ingredient suspected of causing strokes in young women.

Five months later, the Food and Drug Administration took the drug off the market.

But Dr. Roush, then starting her career at Rice University in Houston, did not realize that her stroke would lead to sensations that few people have ever experienced.

A year and a half after the stroke, caused by a lesion the size of a lentil in a region of her midbrain, Dr. Roush began to feel tingling on her body in response to sounds.

Today, more than ever, she feels sounds on her skin.

The first time it happened, Dr. Roush was channel-surfing when she heard the voice of an announcer on a local FM station. When the announcer started to talk, she recalled, "I felt an unpleasant sensation on my left thigh, left arm, the back of my shoulder and even the outside of my left ear."

"It was the kind of icky feeling that uniformly washes over you at a scary movie," she continued. "I had to stop listening. It made me cringe."

Tony Ro, a psychologist from Rice University who has followed her case from the beginning, said Dr. Roush has a rare case of acquired synesthesia.

Synesthesia is a condition marked by odd mixings of the senses. Sensory areas of the brain that do not normally communicate engage in cross-talk.

Most synesthetes are born with such crossed connections. Some experience complex tastes, like apple or bacon, in response to words. Others feel complex shapes, like pyramids, in response to tastes. Many see colors attached to specific letters or numbers.

In this case, Dr. Ro said, the crossed wiring developed as a consequence of the stroke. Imaging studies reveal that fiber tracts from Dr. Roush's midbrain that normally go to higher regions involved in touch are disorganized and diminished. Such disruption can lead to enhanced connectivity in remotely connected regions of the brain like hearing and touch.

Dr. Ro and colleagues have tested Dr. Roush for the last seven years, observing how her brain has reorganized. An article describing her case appears in the November issue of Annals of Neurology.

For several months, Dr. Roush found herself bumping into doors. When she drove, her car would veer to the right. But gradually, the weakness on her left side and the neglect of space around her left side diminished. Her only concession was to give up driving a car with a stick shift because of lingering weakness in her leg.

But in laboratory tests a year later, she exhibited a rare phenomenon. If simultaneously touched on both hands, she would feel an increased sense of pressure on her left hand. Her brain was reorganizing in ways that baffled her doctors.

Not long after that, sounds began to produce tingling, hair-raising sensations of touch on her body. Something about that radio announcer's voice — its pitch or timbre — was unbearably irritating. The sound of a duck quacking or the sharp clanging of a fire alarm sets her teeth on edge. When she rides the subway, the sound of the train hitting the rails makes her left side "feel on the way to tingle."

But the soft sound of water bubbling is "soothing, almost like a massage on my skin," Dr. Roush said, adding, "Round sounds produce a very light tickle but without the annoying part of being tickled."

She always feels touch sensations, positive and negative, on the left side of her body, particularly the outside of her arm, thigh, head and shoulder. They do not reach the bottom of her leg. Sometimes they make her squirm. But most, she said, do not interfere with everyday life.

Recently, Dr. Roush learned how to exploit her oddly mixed up senses.

"I took up the string bass," she said. "Most people get pleasure from this instrument. It is huge. It has a soft deep sound. But I get more pleasure out of it, right there in my left arm. When I play, it feels like a massage."