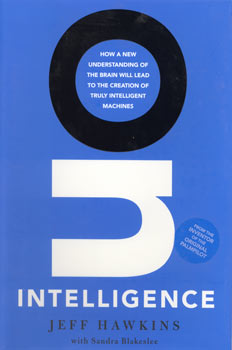 From the inventor of the Palm Pilot comes a revolutionary new theory of intelligence and a bold vision for the future of intelligent machines.

Jeff Hawkins, who created the PalmPilot, the Treo smart phone, and other handheld devices, has reshaped our relationship to computers. Now, with this brilliant book about the true nature of human intelligence, Hawkins stands ready to revolutionize both neuroscience and computing in one stroke.

On Intelligence develops a powerful theory of how the human brain works, explaining why computers are not intelligent and how, based on this new theory, we can finally build intelligent machines. Previous attempts at replicating human intelligence-through artificial intelligence and neural networks-have not succeeded. Their mistake, Hawkins argues, was in trying to emulate human behavior without first understanding what intelligence is.

The brain is not a computer, supplying by rote an output for each input it receives. Instead, it is a memory system that stores experiences in a way that reflects the true structure of the world, remembering sequences of events and their nested relationships and making predictions based on those memories. It is this memory-prediction system that forms the basis of intelligence, perception, creativity, and even consciousness. Intelligence is the capacity of the brain to predict the future by analogy to the past.

In an engaging style that will captivate audiences from the merely curious to the professional scientist, On Intelligence explains what intelligence is, how the brain works, and how this knowledge will finally make it possible for us to build intelligent machines, in silicon, that will not simply imitate but exceed our human ability in surprising ways.

Written with the acclaimed science writer Sandra Blakeslee, On Intelligence promises to completely transfigure the possibilities of the technology age. It is a groundbreaking book in neuroscience, psychology, and the quest to build intelligent machines.

PRAISE FOR
On Intelligence:

"On Intelligence will have a big impact; everyone should read it. In the same way that Erwin Schrodinger's 1943 classic What Is Life? made how molecules store genetic information the big problem for biology at that time, On Intelligence lays out the framework for understanding the brain."
-JAMES D. WATSON, chancellor, Cold Spring Harbor Laboratory, and 1962 Nobel laureate in physiology

"A landmark book. On Intelligence is the first clear exposition of what could be the long-awaited 'great general theory' of human brain function. Loaded with intelligence, insight, and wisdom, it's a wonderfully readable account of the fundamental principles of the brain by a great American original."
-MIKE MERZENICH, professor of neuroscience, University of California, San Francisco

"Brilliant and imbued with startling clarity. On Intelligence is the most important book in neuroscience, psychology, and artificial intelligence in a generation." -MALCOLM YOUNG, professor of biology and provost, University of Newcastle

"Read this book. Burn all the others. It is original, inventive, and thoughtful, from one of the world's foremost thinkers. Jeff Hawkins will change the way the world thinks about intelligence and the prospect of intelligent machines."
-JOHN DOERR, partner, Kleiner Perkins Caufield & Byers

"Jeff Hawkins has written an original, thought-provoking, and, with the help of Sandra Blakeslee, remarkably readable book that presents a new theory of the functions of the cerebral cortex in perception, cognition, action, and intelligence. What is distinctive about his theory is the original way existing ideas about the cerebral cortex and its architecture have been combined and elaborated based on an extensive knowledge of how the brain works-what Hawkins calls "real intelligence" in contrast to computer-based artificial intelligence. As a result, this book is a must-read for everyone who is curious about the brain and wonders how it works. Many sections of this book, especially those on intelligence, creativity, and minds of silicon, are so thoughtful and original that they are likely to be required reading for college undergraduates for years to come."
-ERIC R. KANDEL, professor, Columbia University, senior investigator, Howard Hughes Medical Institute, and 2000 Nobel laureate in medicine